Saturday, April 10, marks National Youth HIV & AIDS Awareness Day (NYHAAD) 2021. Traditionally, it’s a “day to educate the public about the impact of HIV and AIDS on young people,” according to the nonprofit Advocates for Youth, which spearheads NYHAAD.

The group adds, “The day also highlights the  HIV prevention, treatment and care campaigns of young people in the U.S.”

The REPEAL HIV Discrimination Act aims to modernize HIV crime laws, such as those that set harsh sentences for people with HIV who allegedly don’t disclose their status before sex—even if they’re undetectable and HIV was not transmitted. (To read a collection of POZ articles about such laws and efforts to change them, click #Criminalization.)

You can support Advocates for Youth’s call to action by filling out an online form that will generate a letter to send to members of Congress.

See the full article on POZ. 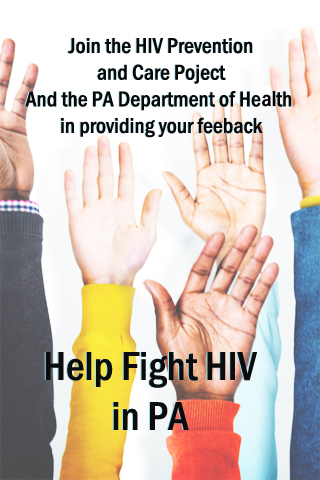 The Pennsylvania Department of Health and the HIV Prevention and Care Project (HPCP) are looking for community members interested in HIV prevention, education, and treatment; We need people affected by HIV and AIDS to provide feedback regarding the state’s efforts in combating HIV/AIDS.

As part of the HIV Prevention and Care Plan, our goals include reducing new HIV infections, increasing access to care, improving health outcomes for people living with HIV, and reducing HIV-related disparities and health inequalities.

As a community member effected by HIV, your feedback regarding the plan will help provide a road map in meeting the goals set out by the State Department of Health and the National HIV/AIDS Strategy. Volunteering can involve reading a short paragraph and providing feedback or just completing a brief survey.

For more information, and to find out how to get involved, check out our Stakeholders Engagement Page on HIV Prevention and Care Project.

Your voice can make a difference!